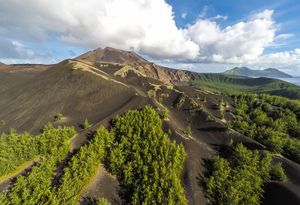 Fioria is a cultural region of Fáel located in the border lands of the Agrion Peninsula between the modern member states of Valaduria and Lito, roughly coterminous with the Fiorian Range, for which it is named. It is part of the greater cultural area known as The Shore, bounded to the north by Ojxia Harbor, the east by Mt. Laurent, the River Cranton and the Teraba Range, the south by Canterbury Bay, and the west by the Vinesene Archipelago.

It was briefly organized as a British Crown Colony named West Fioria during the Demesne as an outpost to thwart possible rebellion from arriving American Loyalists. Today, the area has a recognizable culture as a place of interaction between the language groups to either side of the mountains which comprise it, but no political form as such.

The ancient and venerable Moriellu Clan are by far the largest landholders in the region and claim an informal stewardship over the territory and its people. For centuries the area had been the point of contact for the Spanish and English (later British) empires in Fáel. Likewise today it remains the boundary-straddling inheritance of both Lito and Valaduria.