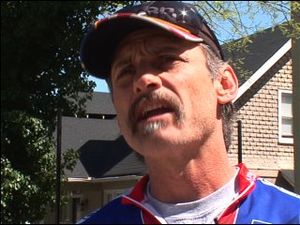 Frank Ballast (b. April 13, 1948) is a Faelish-American novelist, short story writer, poet, cartographer, photographer, blogger and therefore political activist, pseudo-intellectual and aphorist (supposedly) whose published work is almost non-existent. He currently divides his time between Miami and his modest estate (which he calls Silvernest), west of the town of Tara, in Robochti. He has been criticized for being the only person in the country who wears an American flag baseball cap at inappropriate times, with one critic adding: "I've never read his work, and therefore cannot comment on anything else..."

Ballast, who has supposedly written over 30 novels and around 700 short stories, is usually described as an unappreciated science fiction writer whose works are used only as filler material in The Ol' Frontiersman magazine (a right-wing rag which he self-publishes and distributes to "Real Life Super Heroes"). According to his website, however, three "fans" can be deduced from among his followers: his mother (also his agent), sci-fi aficionado Forrest J Ackerman, and (reportedly) an unnamed Labradorian philanthropist who is an admirer and purportedly has a complete collection of the author's works.

Most of his extant material is seen as epitomological excerpts in other works; and Ballast often explores sociological, anthropological, political and metaphysical themes in novels dominated by monolithic outside-observer cultures who act as thinly-veiled mouthpieces for the author's views.

Ballast was born into a middle-class, mixed-religion family in Philadelphia, Indiana. He attended but did not complete college, majoring in architecture. While working for an insurance company, he wrote many stories including We Tender Thugs, Just Like I Remember You: A Love Story in Binary, The Hole in Missouri or The McDonald’s at the Border of Everything, Searching for Laboratories in the Cosmos, and Vortices of the Utterly Useless. Ballast prefers communication by letter saying he "finds telephones offensive and intrusive"; and has written hundreds of letters to family and close friends. He moved to Fáel in 1997.

Sometimes you carpe diem, sometimes the diem carpes you.