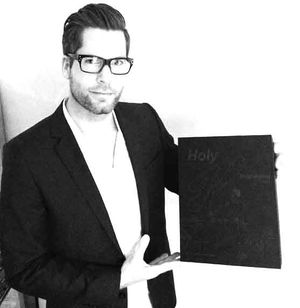 Kjetil Schønhoug (born 8 Oct 1977) is a shipping magnate from the Democratic Republic of the Aroës. He is also the largest single contributor to the Faelish Green Party (FGP) and its collaborative environmental efforts with artist Daniel Arango of the Holy K Movement. Schønhoug has was an early supporter of Arango in the environmental movement of the private sector in Faeland, and is considered by many be a leading advocate among big shipping in alternative fuels research and in the nonprofit environmental services sector in the Aroës and other Member States.

Named after his father’s business partner, Kjetil Schønhoug was born and raised in Østergapet. His parents, Snorre Schønhoug (b. 12 Nov 1950) and Astrid Schønhoug (b. 5 Apr 1952), grew up in different Øry (island-departments), but imparted the same beliefs about hard work, philanthropy, and environmentalism to their son. Later, Kjetil came to Hekajt and met Phillip Rey; the two men would later manage the cargo shipping firm Schønhoug & Rey. After retiring from active participation in the business in the 2010s, Kjetil joined the FGP's campaign committee and worked in the party's public relations department.

Kjetil Schønhoug essentially made a company town out of the hamlet of Spar, ceding his nearby estate, which evolved into the Spar Shipping District. Kjetil’s love of entrepreneurship and the sea first manifested at the age of twelve when he built his first sloop: the Gift. He ferried smoked fish, liquor, and bicycles—early experience for the large scale shipping fleet he would later operate in Spar. His first job was as a deckhand for the Olaf Henrikson Company. After the company was sold, Kjetil found himself unemployed. A friend told him about some boats that could be purchased for 100 crowns (approximately €2,050 in 2013 dollars). Thus the Schønhoug & Rey shipping fleet began in 1999.

After retirement Kjetil began to pursue his artistic patronage and environmentalism in earnest.

Kjetil and Phillip Rey are interested in the welfare of the environment and actively promote ecological causes, such as the promulgation of Law 460-MC. Kjetil volunteered with the Spar Council on Ocean Health and the Nautical Welfare Association of Sailors and Fishers of the Aroës. Rey supported the Tharcladda University oceanographic research society among other groups. After Schønhoug discovered Daniel Arango, they contributed to the artist's Holy K Movement in Faeland. Collectively, the Rey, Schønhoug and Arango helped bring about the passing of the Law of the Rights of Mother Earth, otherwise known as Law 460-MC.