The Lemach culture (unknown, perhaps neolithic - 3rd century CE) was a linguistically isolated culture in north-central Faeland, whose type-sites have been excavated between Huntsham and Frankmark in the North Face geographic region of today's Ríocht Fíl.

The name Lemach culture comes from the first findings that were discovered from excavations on the farm of V. Lemach in 1809. Conducted at several locations in today's Commons lands by the antiquarian _____ _____ (1793–1865) identified clearly non-Roman burials as the remains of the Battle of Tres Viae of 81 CE between Roman and native forces.

In 1873 Spáns Petite-Frere rightly assigned nearby tombs to a pre-Roman culture of the late Iron Age, with a likely Çelathi adstrate. He made several trips to the site bringing back to Argentau part of _______'s collection to enrich the collections of the Seigneur, of which he was vice-curator. He noted, however, that there was a definite inconsistency in grammar, marking out the Lemach as possibly not a dialect group but a wholly separate lanugage.

The excavations continued in various locations in the Clombaegh and Aousafer valleys throughout the late 19th century. With the collaboration of various archaeologists, the chronological placement of the culture of Lemach became clearer, divided into two periods from roughly 4th cent. BCE to a decline after the Washing in the 1st cent. BCE; and a second period of prosperous growth through cooperation with the Vallo-Romans which resulted in Lemach assimilation into the majority Çelathi culture of the region by ca. 300 CE.

All contemporary knowledge of Lemach culture is derived from the texts of Quintus Nocautus Ligurianus and more recent archaeological studies conducted by international teams. 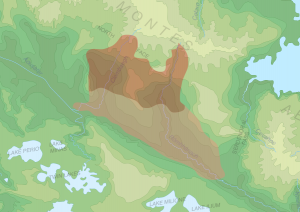 Sites characteristic of Lemach culture have been identified in northern Faeland: the middle southern foothills of the North Face, to the southeast of Argenteau and to a lesser extent in the Pentapolis. The homeland of the Lemach, at the conjunction of mountains, valleys, and cultures, flourished due to favorable geographical circumstances as it was particularly suitable for long-distance exchanges, in which Lemachs acted as intermediaries between various tribes of pre-Roman Faeland. The commercial mediation then broadened to include the northern Faelish world, trading across the Aemili Mountains.

In a broader context, the subalpine Lemach culture was the very last unmixed expression of the Faelish urn culture of the pre-Washing Iron Age. Lemach culture is divided for convenient reference into two parts: The culture's richest flowering was Lemach I, from the misty prehistoric first half of the 4th to the early 1st century BCE. When it was nearly overwhelmed by the Celticized Faels displaced by the Washing. Lemach II begins with the hegemony of the Roman Empire's province of Gallia Maritima extending to the Lemach territories. At first manifest as conflict (see War of Fulvius Ligurianus) and then as commerce (before the Roman Road eclipsed the Lemach trade route in importance).

The early-period habitations were circular wooden-framed leather constructions along the river valleys. Each was built above a low "basement" of stone around a central hearth and floored with river pebbles set in clay. From the 2nd century CE onward some tombs contained burial goods imported from Roman territories. The old sites maintained their traditional autochthonous character through the 1st century, when outside influences became most detectable.

The settlements depended on domesticated animals: remains reveal the presence of goats and sheep in the uplands and pigs, cattle and horses in the valleys. A few legume and cereal crops were cultivated; but more often nuts and fruits were collected. At the beginning of the 2nd century CE, pastoral practices outpaced farming and resulted in the expansion of new settlements in the River Rómhhánach valley.

Metal, though rare, was in increasing use but wooden weapons were the norm (often of Visenti make or mimicry).

Hand-shaped ceramics, made without a potter's wheel, were decorated with white gypsum paint (in gesso). The use of the wheel is known from the carts engraved on these pots. Amber beads from the Baltic Sea, doubtless brought by Celtic merchants, and obsidian reveal extensive and long-lasting networks of long-distance trade. Deciphered written characters (the "Lemachic alphabet") are found incised in ceramics or on stone, in the native language.

The Lemach culture is best known by its burial customs, where a highly developed ancestor cult imposed respect of the necropoli, sacred areas untouched by agrarian use or deforestation. The early-period burials took place in selected raised positions oriented with respect to the moon. Burial practices were direct inhumation or in lidded "urns" which are in fact very small brick tombs covered with slab rock. Stone circles and alignments are found. More common burial urns (tomb and urn appear to be the same word in Lemachic) were painted with designs and buried directly with no housing. Bronze vessels are exceedingly rare.

Cremation was anathema and virtually restricted to the poorest strata of Lemach society, slaves, and corpses of the sick. Cremation near the burial site, followed by ash and bone deposited in terracotta jars, then placed in excavated pits set at determined distances one from the other in scattered necropoleis, characterize many small such burials.

In a Lemach culture tomb southwest of Veszhul was found the oldest known remains of common hop beer in Faeland.

Several theories have been put forward to explain the presence of a language isolate. Contemporary neighbors of the Lemach claimed that they were in fact related to the Çelathi. The story alleges that in their distant past a chieftain had simply created a new language for them, in order to protect themselves and maintain tribal secrets.