Deprecated: The each() function is deprecated. This message will be suppressed on further calls in /home/customer/www/vvikipedia.co/public_html/includes/MagicWordArray.php on line 197
 Martixiana - Anglo-American Cyclopaedia 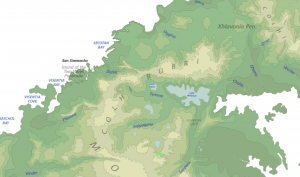 Martixiana is part of Vhallonesia, more specifically it is located in (and nearly coterminous with) the province of Axher Fucinus, from a more specific geographical perspective it can be defined as the drainage basin of the rivers Terreno and Soppalpino. It was in fact known as the Valley of Martius since the Roman era.

From an historical perspective Martixiana is the area surrounding the Roman city of Fhužin. The etymology of Martixiana is in fact Martiensis ager (lat.) ‘the area around Martius’. At the time of the Roman Empire Fhužin was an important city, during the Centociviti the dukes of Fhužin continued to hold sway over the area.

Nowadays we talk about Lower or Inner Martixiana: Lake Saxa and Lake Martius, including the city itself and the parallel Terreno plain; and Upper or Outer Martixiana: the Valley of Soppalpino, including THE LAKES and western MTN VALLEYS. Very rarely is the lower end of the Vherron Gate included, although in modern times the area has become culturally and linguistically close to the Martixiana.