Deprecated: assert(): Calling assert() with a string argument is deprecated in /home/customer/www/vvikipedia.co/public_html/includes/parser/Preprocessor_DOM.php on line 542
 National and Regional Identity in Faeland - Anglo-American Cyclopaedia

National and Regional Identity in Faeland

Both the conceptual nationhood of Faeland and the perceived distinctions between different parts of its territory are said to derive from historical, geographical, linguistic, socio-economic, and political factors.

Present-day Faeland was shaped in the crucible of the Faelish War of Resistance But Also the Construction of the Nation. The expulsion of colonialists was followed by a contested process of unification and piecemeal political centralization, which began in the Ríocht Fíl and gained traction slowly throughout the other regions of the Faelish Isles. Peripheral "nationalism" in its modern form arose during the 19th century in Lito, Valaduria, and -to a lesser extent- the Latin Coast. The modern division of Faeland into Pages and Forals represents an attempt to empower nationalities and regional identities within a Faelish federation as a legitimizing foundation for an overarching state.

From -arguably- the Roman era onwards, in most parts of the Isles, nearly all regions have identified themselves as distinct from the rest of Faeland in one or more of various ways. In the north: the Ferraiones, Vhallonesia, Argentau, Falcatta, the Rumanha and the Saxon Hegemony; in the west, the Dhíall and the Aroës, and in the east Griswold, all distinguish themselves through claims of historical autonomy and, often, the presence of a local minority language. In the south, Valadurians and Vilãos claim a unique regional identity through Iberian colonization (Spain and Portugal, respectively) or through the longer-lasting presence of English imperialism along The Shore. In central Faeland, identities have long been connected to the historic Kingdom of Aln and its dozens of constituent polities. All of these are to say nothing of various minority ethnic groups, both indigenous and naturalized alike, which have briefly or not at all achieved any form of political sovereignty or socio-economic self-determination.

Demands for greater autonomy or full independence persist in certain regions, clashing with concurrent views that decentralization has already gone too far in hindering national progress and unity. The most dramatic recent manifestations of separatism have been the imperialist campaign of the American-backed Faeltrekker group in the late 20th/early 21st century and their unilateral declaration of independence in 2015; and the semi-revolutionary Çelathi Liberation Front (Maoist)-led insurrection which began in the 1970's and cooled with a 1995 cease-fire.

Aspects of Unity and Diversity across the Faelish Islands 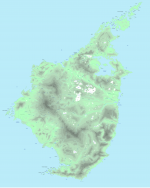 Fig. 758 Topography of the Archipelago
File:Rainfall.jpg
Fig. 759 Precipitation and Arid Conditions of Faeland

"...the Archipelago implies a -purely verbal- physical unity which is at best a spiritual kinship."

Mainland Faeland has been historically rather inaccessible from the outside and defined by difficult communication between its internal regions. "[Mountain] Ranges and the elements divide within itself the territory which castles and treaties otherwise separate countries" (Neïjo). In contrast to the relatively "vast idyll" of the central lowlands, the encircling peripheral highlands "display every possible texture" (ibid). Diversity in forms of agriculture and its productivity are conditioned by the contrasts in rainfall between "wet" and "dry" Faeland, and -in modern times- to the extent that industrialization has been introduced. In the past the transalpine regions benefited from cheap coastal transport, whereas transport difficulties hindered the development of the central regions and inhibited intercourse between the two.