Deprecated: The each() function is deprecated. This message will be suppressed on further calls in /home/customer/www/vvikipedia.co/public_html/includes/MagicWordArray.php on line 197
 Octarchy - Anglo-American Cyclopaedia 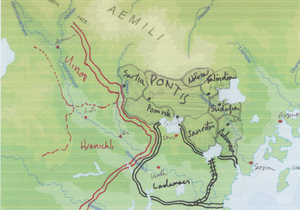 Map showing the cantons at the start of the Nantes Crusade.

The Sarmatio-Faels established their quasi-independent marches in the foothills below the mountains of the Latin Coast and the Faelish-inhabited lowlands near Servon. The Octarchy's territories stretched from the Rómhhánach in the southwest nearly to the Lhemine in the northeast. The cantons were vassals of the Kingdom of Aln for nearly six centuries. Overrun by crusading European Christians during the Nantes Crusade, much of the area of the Octarchy became the core of the Monastic State of the Saxon Knights.

The 14th-century chronicler Peru of Códini mentioned several extant ethnic districts as evidence of the vanquished cantons, roughly contiguous with central-eastern Saxony today. Peru estimated that while most districts could muster perhaps 50 men, Pontis could raise 20 cavalry and 200 men-at-arms (revealing a still-prosperous yeomanry); whereas Sauroter, the poorest district, had "a most deplorable multitude of fighters" (likely peasant militia). In contrast, the contemporary Saxon Order had nearly two hundred knights and their retainers, as well as about 600 infantry.