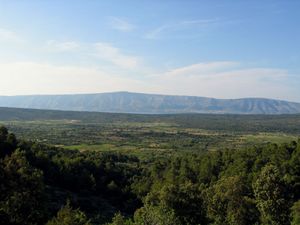 A view of Ła Vassa, the major agricultural region of the Pentapolis.

This article is about the geographic and cultural region. For the modern page/state, see Federation of the Latin Coast.

Pentapolis is the modern colloquial nomenclature used to refer to the geo-political northern extremities of Faeland Island. While inclusion of the Ferraione Archipelago is sometimes contested, the southern limit of the physical and cultural region has long been established as the Aemili Mountains. With precious little arable land nearly all the territory of the Pentapolis can be defined in terms of its relationship to either sea or mountains, with fishing and herding being prime agricultural activities in the area.

The name Pentapolis predates current usage and causes much confusion. The "Pentapolis" area has a large degree of overlap with the Latin Coast, and the two names are often regarded as representing the same area. Adding to the confusion is the Vallo word Pentapoli; which is a common -if increasingly antiquated- short form name for the Federation of the Latin Coast.

The regions of of the Pentapolis are areas identified by the inhabitants as loosely cultural sub-divisions of the Latin Coast. These regions are tangential in the historical record, where civic ties and politics were more important; but in the modern scholarship of linguists and sociologists the distinctions take on greater significance.

Conceptually, there is no clear theme to the taxonomy of these regions. Some, particularly in the Margoreci, can be seen plainly as distinct geo-physical units, defined by physical boundaries such as bodies of water, mountain ranges and rivers. This region has retained a sharp identity, even when the nationality of the people living there changed drastically over the course of time. Conversely, the division of "central" Pentapolis between the bay area and the twin Vassa and Vassela plains cannot be understood as a logical division based on physical boundaries, but instead seems to follow slowly-developed lines of communication and bipolar centers of civic gravity. Nevertheless, these socio-linguistic regions also survived civil wars and even colonization, showing that they had not acquired overtly political connotations. 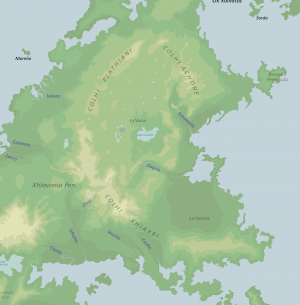 "Ła Vassa", the name for the fertile low country of the Pentapolis.

Despite being an extension of the greater Xhlavonia Peninsula, the Ła Vassa region is often regarded separately from the lands immediately surrounding the Colhi Rubri. There is Ła Vassa proper, which is a synclinic plateau with a largely agrarian culture and the sea-level Ła Vassela plains south of the River Siagrio. Two distinct communities can be distinguished from the urbanized coasts and the agricultural hinterland plateau. The area hosts seven urban zones and ranks as the second most industrialized region in the Latin Coast.

The plain was settled and farmed first, in pre-Roman times, and has been completely devoted to agriculture since the Wars of Pacification, when efforts from Roman settlers transformed the landscape into patchwork latifundia. The older and smaller settlements deriving from ancient times can still be found here and there as hamlets, depressed by the larger cities' magnetism for younger people.

The traditional boundary of the region has been a rough diagonal bisecting the peninsula from northwest to southeast and following the rivers Veloro and Cavho, with the Colhi Xhiaxri an intermediate zone of sharper linguistic divide from one side of the range to the other.

Divided between the Member States of the F.L.C. and Falcatta, the Margoreci is the lower and shorter of the two major peninsulas which comprise the greater Pentapolis area.

The Pentapolis region and La Vassa at the north-center is a system of ancient valleys surviving from the tectonic collision of an offshore land mass, "Tolis", with the mainland of the Faelish island. Since that time the system has been filling with sediment from the older rivers flowing into Lakes Clauzio and Martius but also from the mountains themselves. The shoreline facing the Celtic Sea depends on a balance between the sedimentation rate and isostatic factors. Until about 1950 the River Cholla delta was prograding into the sea. After that time due to human alteration of geologic factors, such as the sedimentation rate, the delta has been degrading and the coastline subsiding, resulting in ongoing contemporaneous crises in the city of Sarlegna, where much irreplaceable art and architecture is likely to be lost due to soaring sea level in the next centuries. Where the land surface now dips below sea level the river must run at a relative elevation between dikes.

Ła Vassa (The Low or Low Country) -Pentapolis' major geographical feature- is often regarded as a syncline, or dip in the crust due to compression at the edges. Regardless of whether this concept accurately describes its geology, the valley is manifestly a sediment-filled trough, or virtual syncline. The surface terrain is therefore divided into two overall types of landform: the plain, or flat surface at the center, and the anticline at the edges, taking the form of hilly country in which the outcrops of the original rock are visible along with alluvial fans formed from the outwash of the more severe anticlinal terrain; that is, the the Montes Aemili, the Colli Albini, Colhi Rubri, and the lower Plautiani Mountains. The depression is particularly suited for agriculture.

Surface runoff water is not of much value to the valley's dense population for drinking and other immediate uses, being unreliable, often destructive and heavily polluted by sewage and fertilizers. Its main anthropic value is for hydro-electric power, irrigation and industrial transport. The cost of purifying it for human consumption makes that process less feasible. Fresh drinking water comes from hundreds of wells concentrated especially in the upper water table zone. The major settlements therefore are elsewhere to preserve the cleanliness of the water sources. Now these cities form an almost continuous megalopolis stretching from Fhužin to Martžu.

The plain was settled and farmed first, in pre-Roman times, and has been completely devoted to agriculture since the Wars of Pacification, when efforts from Roman settlers transformed the landscape into patchwork villas. The older and smaller settlements deriving from ancient times can still be found here and there as hamlets, depressed by the larger cities' attraction to younger people.

The Five Cities of the Pentapolis

The history of the Pentapolis begins before the arrival of the Romans and continues to the present day. Throughout most of this period the region was a land of independent and often fractious city-states.

The area of current Pentapoli was settled at least since the 3rd millennium BCE, as shown by the archaeological findings of ceramics, arrows, axes and carved stones. In the following centuries it was inhabited first by some native tribes, who founded villages; later, the area was the incubator of the Gnaghi civilization. This people founded several cities (including the famous Hippias and Hipparchas) and extended their rule across the Falxian Peninsula. Their development was halted by the mountain tribes: and after centuries of struggle, around 500 BCE the entire area of what is now Pentapoli seems to have suffered some form of drought or food shortage, and advanced civilization regressed until the arrival of the Romans.

In northeast Faeland, on the Margoreci Peninsula, the Gnaghi people built cities. Each city was ruled by a strong warlord called a Xeniar, who commanded a personal army and was installed on his throne by a religious caste. The xeniar wore thaghi denoting their rank. These cloaks featured embroidery to indicate their status, although the garment itself was common in Gnaghi culture, as the climate of the region demanded extra clothing.

The Gnaghi peasants worked under the control of lieutenants who had feudal-type powers and obligations under the xeniars' rule. The Gnaghi developed a written language using ideograms. Their language blossomed to over 1,000 known images, and literature, specifically poetry, was a pursuit of all the moneyed classes. The peasants lived in mud-brick houses, while stone was used to build the houses for the xeniar, nobles, and priests. They developed the manufacture of bronze and pottery; their ceramics fetching high prices in trade with the Ferraiones. They had a certain Epicurean manner albeit literary— decorating every surface they could with endless epic poems. As a culture, they couldn't resist filling every space with stories and legends about the deeds of their local heroes.

Like other Çelathi cultures, endemic warfare afflicted the entire region, and all the cities engaged in battles with each other in shifting alliances in what is known as the Warring Cities period. Most of the smaller towns were destroyed, and the populations were usually brought to the victorious city. By 2750 BCE the entire Gnaghi region was divided into two kingdoms, the Hippian in the north and the Hipparchan in the south, each with an absolute king demanding total obedience from all layers of society in the service of war.

By 2600 BCE these two states' militarism had caused economic collapse. The kings of both cities agreed to a pact: they each executed all their wives and took each other's daughters as wives. Despite the slaughter of dozens of relatives, the peace was achieved, and the two warring kingdoms had been replaced by the single united kingdom called "Drepani", for the native name of the country. Drepani in its time was the richest kingdom in Faeland with a probable population of a mere 20,000-30,000. The kings maintained two capitals with palaces, fortresses, and walled gardens approximately one kilometer apart, joined by what we might call today a metropolitan area of suburbs. Drepani's rule was harsh, punishing crimes with whipping, maiming, amputation, and death. Despite previous follies, this society was still very militarized, with every noble family expected to donate second and third sons to service, and every village expected to contribute men to serve as skirmishers and scouts and provide food for the soldiers from the cities. Gladiatorial-style combats were extremely popular, with the combatants typically fighting on a raised stage in the middle of the public square for all to see. Peasants were serfs bound to the land and under the virtual ownership of the ruling warriors and priests. (Incidentally, the word for the caste in this part of Faeland was phelnc.) Kings celebrated battlefield victories by executing prisoners of war in the city dungeons after parades through the public squares.

The Rumhanese historian Susurd Imulchaz writes that analysis of archaeological material from that period reveals that the processes of Romanization were inconsistent. While urban centers, both coastal and inland, were almost completely romanized (most being established by Romans themselves), the situation in the countryside -especially mountain regions- was entirely different. Despite the Çelathi, for example, being subject to a strong process of acculturation, they continued to speak their native language, worship their own gods, maintain their traditions, and follow their own socio-political organization; which was adapted to Roman administration and political structure only in a scant few obligatories.

See Pentapolis in the Middle Ages, a period also called The Hundred Cities

See Federation of the Latin Coast and Republica Falcatta.