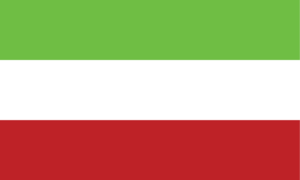 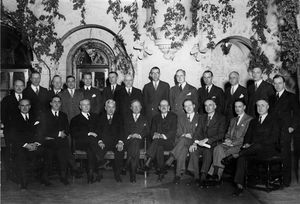 The "Code Committee" responsible for the creation of the Republic.

The Republic of Faeland is the name of the the federal republic and parliamentary representative democracy established in 1925 (part of the Federation of Faelish Free States stipulated in the Treaty of London) in central Faeland to replace the ousted British colonial government. Its borders were nearly coterminous with the modern Kingdom's borders, with the exception of Valania.

Following liberation in 1925 after the Faelish War of Independence, the dysfunctional republic barely survived the Civil War, only establishing itself formally in the spring of 1935. In 1936, a national assembly was convened in Alntlöán, where a new constitution for the country was written and adopted on February 11th of that same year. The period of liberal democracy that followed faced many challenges, not least of which was inheriting an economy almost completely destroyed and a populace divided by ethnic conflict.

Negotiations for foreign aid (principally from the U.S.) collapsed in the late 1930s as war loomed. Throughout the 1940s public faith dwindled as the Faelish population accused the Republic's leaders of taking kickbacks to "host" foreign powers throughout the war years. Fake news reports claimed construction of both Axis and Allied bases (usually submarine pens) and consequently many bombing raids and coastal bombardments were ordered by both belligerents. When the Americans left in 1945 the economy again collapsed. The faltering republic faced numerous problems: including resumption of sovereign debts to the UK and loan repayments to the US, the re-emergence of political extremism (with paramilitaries – both republican and monarchist) as well as contentious relationships with other states of the isles.

Legal measures enacted by the Royal Faelish Party (known as the "Re-Establishment") administration in February 1951 curtailed the government such that it effectively ceased to function as intended. Fighting broke out when leftist elements of the military attempted to arrest the royalist Ministers. The army split down the middle, with monarchists claiming a military coup. The rift opened up huge divisions across the country; partisan flying columns quickly occupied their old strongholds and the nation once more plunged into civil strife.

The republic limped along until 1955, when the nearly complete victory of the monarchist forces during the Second Faelish Civil War led nobleman Aodhán, Vodsch Larnic -with the support of his peers- to declare an end to the republic with his Sublime Edict, thus re-establishing the Kingdom of Faeland. The flag of the Faelish Republic, as it has sometimes been called, was lowered for the last time on November 5, 1955.