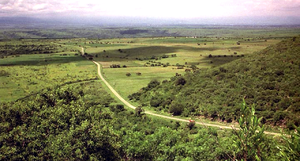 A section of the road, looking south into Faeland.

The Roman Road was an extensive network of trade routes that linked up to a single Roman-built road that crossed the Aemili Mts., connecting southern Faeland with the Roman province. The Roman Road gets its name from the lucrative trade between the native Faels of the interior to the the southwest and those they called "Romans", namely the Vallo-Roman people (although the Visentine tribes had been using the path long before). A major impetus for the medieval development of Argenteau, the road functioned also as a place for capturing slaves and recruiting mercenaries.

An ancient trackway of the Pentapolis and North Face that was first used by the Faels mainly between the modern cities of Dermot and Rhexíl. The Romans later paved the route, part of which is identified on the Antonine Itinerary as Iter X: "Item a Rhexíl ad oppidum Dermum" - "from Rhexíl to the hill-fort of Dermot". Its route is now largely covered by the Route 2 highway linking Dermot-Argenteau-Rhexíl. Vast portions of the modern paving are, however, sited a mile or so away from the ancient cobbles.

The road itself saw active use well into modern times, only becoming somewhat defunct with the advent of steam locomotives. It is a popular road trip route, as it goes through scenic country and historic towns.