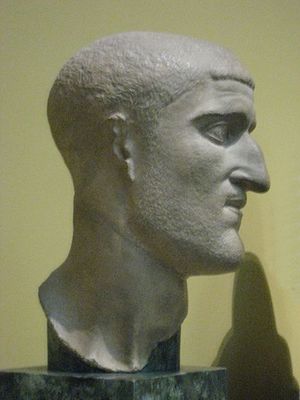 Syagrius II, whose motto was lupus me docet, "the wolf teaches me."

Syagrius II (452 - 13 September 495), was the first duke of Falx. Viewing himself as a direct successor to the Roman Emperors of Antiquity through his father, he was "King of the Romans" from his flight from Soissons; and attempted to re-establish Roman authority in Faeland.

He was frequently at war with the cities of Pentapolis, and thus is a controversial figure. His wars are thought to be the beginning of Falx's ethnogenesis.

His contemporaries called him "Hammerer of Cities" for his habit of besieging towns. He was also known for his temperamental stubbornness and his unorthodox methods of governing, often proceeding on his own path no matter what the lesser magistrates decreed.

He was a religious sceptic. He is said to have denounced Moses and Jesus - whom he called "the Nazarene," claiming they were frauds and deceivers of Rome. He delighted in uttering blasphemies and making mocking remarks directed toward Christian sacraments and beliefs. Syagrius's religious skepticism was unusual for the era in which he lived, and to his contemporaries, highly shocking and scandalous considering it was often used as a tool for creating alliances with barbarian tribes. Nevertheless his seal bore the typical chi-ro letters (as seen on the Flag of Sânts-Nemhora).