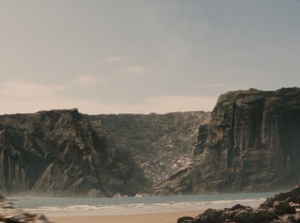 A view of the city from across the Aroëse Gulf.

Tharcladda is the capital of Thole, in the Ríocht Fíl.

Tharcladda is home to the Tharcladda Register-Tribune, a periodical of note. The newspaper has one of the largest editorial archives in the Gaól Plain region, containing both old newspapers and objects, such as the camera of the late journalist Braulio de Calá.

Tharcladda, which may well be the oldest surviving city in Faeland, was founded in 350 BCE by Greeks from Thessaly as a trading port under the name Νεαπετθαλία (Neapethalia, which was later corrupted to Neathalatta (or "New Sea"), which gradually underwent Faelicization). The connection between Tharcladda and the Thessalians is mentioned in Book I, 85 of the History of the Peloponnesian War by Thucydides. The precise circumstances and date of founding remain obscure, but nevertheless a legend survives. Clotis, while exploring for a new trading outpost —or "emporion"— for Thessaly, exceeded the Pillars of Hercules and was blown north. He discovered a hidden cove fed by a freshwater river and protected by two rocky promontories. Clotis was invited inland to a banquet held by the chief of the local Etimoli tribe for suitors seeking the hand of his daughter Goúrta in marriage. At the end of the banquet, Goúrta presented the ceremonial cup of wine to Clotis, indicating her unequivocal choice. Following their marriage, they moved to the hill overlooking the cove; and from this settlement grew Tharcladda. 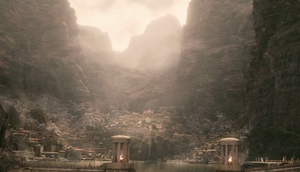 Tharcladda was one of the first Greek ports outside the Mediterranean, growing to a population of about 1000. Facing a lack of support from home, the Greek colony allied itself with the local Faels for protection. This protectionist association brought aid in the event of future attacks, and perhaps equally important, it also brought the people of ancient Faeland into the complex city-state, radically altering the ethnic makeup of the settlement. The city thrived by acting as a link between the Aroës Archipelago and the mainland, hungry for the bounties of the sea. In this role the city largely maintained its independence until the rise of the thaneships of the Viking Age, when its character again underwent a radical shift. It has the unique status of being the only city founded by ancient Greeks located within the greater Scandinavian world.