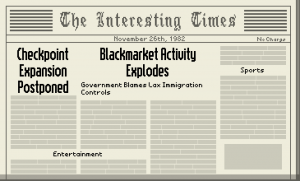 The Interesting Times is a nationally distributed Faelish daily, middle-market newspaper that serves as the flagship print publication of its owner, NewsWolf. The newspaper has a generally centrist audience. Founded by Morgan Ellis on September 15, 1982, it operates from NewsWolf's corporate headquarters on Jones-Davidian Drive, in Griswold. It is printed at 7 presses across the Faelish Isles and also published digitally with no paywall. Its design is influenced by the style of local, regional, and national newspapers worldwide, specializing in concise reports, black and white images, informational graphics, and highlighting of op-ed culture stories, among other features.