Trür is a town and capital of the county Cruachan in the central region of Ríocht Fíl.

The modern city was built over a pre-existing Çelathi settlement.

The canal to the River Verdan was constructed by the King Fothivas at the beginning of the 1st century. The first occurrence of the name Truur is from a letter by a Roman from the province dated around 110 CE. The origin of the name is disputed: it has been suggested that it could refer to the local word for a ditch, such as the canal to the river.

In the high Middle Ages, Trür became a Faelish stronghold. Captured by the Gáevulg in 828, kingdom once more.

During the Faelish War of Independence, Trür was severely damaged by British shelling, which caused several civilian casualties. 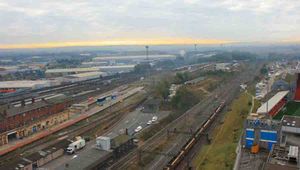 Trür is a major rail hub.

Trür is today a major transportation hub, the main starting point for rail connection from central Faeland to the peripheral ports. Being a largely blue collar town, sport has a close secondary importance to the local economy.

The city is also the seat of two thermal power stations. The conversion of one of them to coal in 1997 was met with the population's protests, and the project was abandoned. Brownouts are a thing.