This article covers the culture of Romanized areas of Faeland. For the Romance culture of Faeland after the collapse of Roman power, see Latin Coast.

The term Vallo-Roman culture describes the Romanized culture of northeast Faeland under the rule of the Roman Empire. This was characterized by the Çelathi adoption or adaptation of Roman mores and way of life in a uniquely Faelish context. The well-studied meld of cultures in Faeland give historians a model against which to compare and contrast parallel developments of Romanization in other, less-studied Roman provinces.

The barbarian invasions effecting the empire beginning in the early fifth century forced upon Vallo-Roman culture a fundamental "hardening" that made it relatively impervious to further external influence.

Vallo-Roman culture persisted into the 7th century. The formerly semi-Romanized North Face, once it had been occupied by the Kingdom of Aln, would develop into a hybrid culture instead. Roman life, centered on the public events and cultural responsibilities of urban life in the "res publica" and the sometimes overindulgent society of the self-sufficient rural villa system, took longer to collapse in the Pentapolis region -if it can be said to have collapsed at all- evolving into the city-states of the medieval and Renaissance era.

Vallo-Roman language persisted outside of the Pentapolis, to the southeast, in the river deltas between the Aemili and Albini mountain ranges, that formed an effective cultural barrier with the Faels to the south and west.

Gallia Maritima was a single Roman province, which was sub-divided in the later third century reorganization under Diocletian, under the Praetorian prefecture of Galliae. On the local level, it was composed of coloniae which preserved, initially, the boundaries of the formerly independent tribes of the Gallic Plain, which had been organized in large part on village structures. These features remained in the Roman civic formulas that overlay the smaller of the settlements. The coloniae themselves were devoid of such vestigial elements.

Over the course of the Roman period, an ever-increasing proportion of Faels gained Roman citizenship. In 212 the Constitutio Antoniniana extended citizenship to all free-born men in the Roman Empire.

The pre-Christian religious practices of Roman Faeland were characterized by syncretism of Graeco-Roman deities with their native Çelathi or Celtic counterparts, many of which were of a strictly local nature. Assimilation was eased by interpreting indigenous gods in Roman terms. In particular the local culture shared in the veneration of the wolf as a sacred totem.

The imperial cult, centered primarily on the numen of Caesar, came to play a prominent role in public religion in Gallia Maritima, most dramatically at the ceremony venerating Rome and Caesar at the Condate Altar near Bello annually on 20 August.

Vallo-Roman art is the artistic manifestation of a cultural syncretism between the ancient Faelish culture and Roman culture. Roman culture introduced a new phase of anthropomorphized sculpture to the Faelish community, synthesized with Çelathi traditions of refined metalworking, a rich body of urbane Vallo-Roman silver developed, which the upheavals of the 5th and 6th centuries motivated hiding away in hoards, which have protected some pieces of Vallo-Roman silver, from villas and temple sites, from the universal destruction of precious metalwork in circulation. 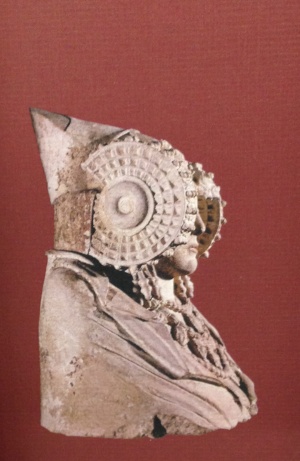 Statue of a Vallo-Roman goddess associated with the city of Martžu.

Much Vallo-Roman sculpture survives, but often in damaged or fragmentary form. Portraiture is a dominant genre, growing perhaps from the traditional Roman emphasis on family and ancestors, as the entrance hall (atrium) of an elite Roman house would have displayed ancestral portrait busts. This custom was duly brought to the island, and survives even today in traditional Vallo communities. During the Roman Republic, it was considered a sign of character not to gloss over physical imperfections, and to depict men in particular as rugged and unconcerned with vanity: the portrait was a map of experience. During the Imperial era, the subject in question was often idealized, but there is a notable exception in Vallo-Roman culture, especially among the newly assimilated people. The warrior culture from whence they had come appreciated the frankness of early statues of Roman people.

Many museums hold collections, notably the Museum of Art in Fhužin. 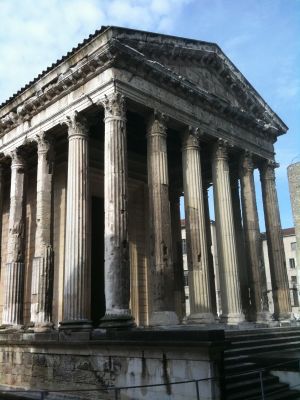 A temple to Claudius, extant, in Appoleo.

Vallo-Roman architecture made lasting contributions to the architecture of the island of Faeland as a whole, especially in the early to mid middle ages. It became the standard for insular civilization. The Latin Coast itself is a repository of architectural features, which perhaps did not originate on the island, but were channeled by the Romans into the native civilization.

After the withdrawal of the Roman imperial government, many of the villas in the countryside became the new centers of political life for people in the country. Slowly, the villas were appropriated as centers of government by the cities in what historians now call the "villa system". With the obvious exception of the Vallo Language, the villa system might be one of the single largest legacies that Vallo-Roman culture left the Pentapolis, as it did much to shape development after the Roman era.

In the former province, the 'villes' developed into institutions after initial collapse of government. Always self-sufficient, villas become de facto manor-like establishments. In that way, something of the old Vallo-roman system survives, while it did allow for a parallel to the continental feudalism. The phenomenon was most common in the vast Gallic Plain, in areas lacking strong urban centers. Over time, there came about powerful locals with private armies who over time retained rights to keep their land and authority, and bypass normal protocol and speak directly with the city governments. In exchange for their independence, they were made to grant their forces to any endeavor deemed necessary, usually the collection of taxes in kind. These villa-lords were generally very loyal to their respective city, because its grant was the only legitimization of their authority that existed. Typically, if a rival city conquered their land, they were dismissed as local warlords (albeit often replaced with a loyal duplicate).

The Romanized province was bound together by a network of Roman roads that linked cities and towns. The Via Claudia (laid out in 62 BCE), reached from colonia Fucina Augusta to Vallorum, laterally bisecting the province and providing quick response for the military.