The Vallum Aelium or Aelian Wall (commonly called the Vale) was a wood and turf —and in some places, stone— fortification built by the Romans across the Montes Aemili. Representing the southernmost frontier barrier of Roman Faeland, it spanned approximately 195 km (121 miles) and was, on average, 3 meters (10 feet) wide and 5 meters (15 feet) tall. Security was bolstered by a deep ditch on the south side where terrain did not prohibit. The barrier was in fact not one continuous structure, but several. 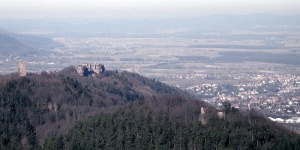 Construction began in late 122 CE at the order of Roman Emperor Hadrian, and took about 13 years to complete. Trade relations and tariff collection likely spurred construction. The wall was protected by sixteen forts with a number of small fortlets between them; troop movement was facilitated by a road linking all the sites known as the Military Way. The soldiers who built the wall commemorated the construction and their struggles with the barbarians in a number of decorative stelae, many of which survive.

Most of the original wall and its associated fortifications deteriorated over time, but many remains are still visible; several villages still exist at some of the larger garrisons (mostly where trade continued), allowing some view of town planning. Most of these have come under the care of national museums in Pentapoli.

After the collapse of the Roman empire, the cities of the Latin Coast maintained the walls intermittently until they were superseded by wooden fortifications used to control key passes and valleys.

These later fortifications became a series of defensive stone walls, originally more than 75 miles long, that surrounded and protected the Pentapolis during the middle ages.

Despite their small size the city-states were well protected by civic walls and used the mountains as another line of defense. Its weakest point, at the Serdenoral Pass, the wall was built thicker, and a massive gate was constructed. The walls of this pass are the only section that was systematically demolished to make room for roads and highways in modern times. However the Veccha Rubra Gate was left standing, due to its historical significance.

Today's wall reached its current state in the 15th century, along with its 40 towers and 5 fortresses. The wall was meant to protect the territory of the Five Cities surrounding the Marquies Sea, and of course to the north, La Vassa, the breadbasket of the region.