Bhiriduxhiann Arniho (Middle Çelathi, often romanized as the Viriducian Empire) was an Iron Age alliance of city-states clustered around Lake Athlóa in the Faelish Midlands. These city-states conquered the territory adjacent to Lake Athlóa from c. 675 BCE onward, forming a tributary empire until their own collapse facing overwhelming Valano-Celtic migrations during The Washing, dated to 403 BCE.

The alliance was formed following a civil war between Alntlöán and its former constituent city-states (in a league known as the Kingdom of Cruachan). Despite the initial conception of the empire as an alliance of several cities, Alntlöán quickly established itself as the dominant partner. By the time the Celts arrived in the 400s BCE, the lands of the Alliance were effectively ruled from Alntlöán, and the other partners in the alliance had assumed subsidiary roles.

The alliance waged wars of conquest and expanded rapidly after its formation. At its height, the alliance commanded an empire that covered most of the Midlands as well as a few detached exclaves. Bhiriduxhiann rule has been described by scholars as hegemonic and indirect. Leadership of conquered cities was usually left in local hands as long as they agreed to pay semi-annual tribute to the alliance or provided military support in wars with enemy states.

At different points in time, the three principal cities () were the largest cities in the Faelish Isles. These cities and several adjacent towns blossomed as centers of commerce, ideas, ceremonies, and theology. In turn, they radiated influence outward into neighboring cultures in central Faeland. 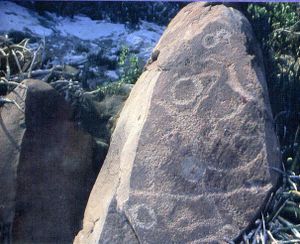 A Bhiriduxhiann stele, typical of the early formative period.

Bhiriduxhiann -hereafter Viriduci- peoples were originally indigenous to central lowland Faeland, yet were descended from highland peoples who migrated back into the region from the north in the late 8th century BCE (most likely, given their ultimate orientation, from the Almuhr Highlands). According to the codices in which the Viriduci recorded their history, their place of origin was called Ferann. The early migrants settled the Athlóa lake valley and surrounding lands by establishing a series of independent villages. These early cities were ruled by petty chiefs called "richh" (singular "righ"). Most of the hamlets and towns in the region prior to the Viriduci migration were assimilated into the ascendant Viriduci culture.

These early city-states fought various small-scale wars with each other, but due to the shifting nature of alliances no individual city gained dominance. They had entered the area after most of the limited agricultural land had been taken. They persuaded the king of Vracosa to allow them to settle in a relatively infertile patch of land.

After serving the king in battle, the city was granted one of his sons to rule over them. According to native accounts, the insufferable prince was murdered by the city's generals. When the king of Vracosa heard this, he attacked with the intention of wiping Alntlöán off the map.

The city allied itself with the Kingdom of Cruachan and paid tribute to its king, Faeniana. With Alntlöán assistance, Cruachan began to expand into a small tributary empire. Until this point, the Alntlöán city did not have a legitimate king. The leaders of the army successfully petitioned one of the kings of Cruachan to provide a daughter to marry into the leading general's line. Their son, Coghlan, was enthroned as the first righ of Alntlöán in the year 901 BCE.

As the Kingdom of Cruachan continued to expand their territory with the assistance of the Alntlöán armies, the Kingdom of Diuchill grew in power in the northern portion of the lake basin. War eventually erupted between the two states, and the Alntlöáns played a vital role in the conquest of Diuchill. By this time, Alntlöán had grown into a major city and was rewarded for its loyalty to the Cruacha by receiving Diuchill as a tributary province.

Civil War and the Alliance

In 756 BCE, the Cruachan king Ennis died, and the resulting succession crisis precipitated a civil war. The Alntlöán supported Ennis's preferred heir who was betrothed the Alntlöán king's daughter. His brother, Mohail, soon usurped the throne and turned against those factions that opposed him, including the Alntlöán king Cohnaird. Cohnaird died in single combat with Mohail during battle.

The new Alntlöán king, Torton, remained defiant to Mohail, and in response Mohail had Alntlöán blockaded and demanded increased tribute payments. Mohail similarly turned against Diuchill, and the king fled into exile. He recruited the military assistance of the king of Fraoch, and the Althóans gained the support of a dissident Vracosa city, ____. In 753 BCE, Alntlöán, Diuchill, _____, and Fraoch went to war with Mohail and emerged victorious in 750.

After the war, Fraoch withdrew and the three remaining cities formed a treaty known today as the Tripartite Alliance. The Cruacha lands were carved up between the three cities who agreed to cooperate in future wars of conquest. Land acquired from these conquests was to be held by the three cities together. Tribute was to be divided so that two fifths each went to Alntlöán and Diuchill and one fifth went to Cruachan. Each of the three kings of the alliance in turn assumed the title "Senorigh" ("Elder King", often translated as "Emperor"), which placed them in a de jure position above the rulers of other city-states ("richh").

The Tripartite Alliance would, in the next 100 years, come to dominate the Lake Althóan basin and extend its power from the mountains to the Trifluvian Delta. Over this period, Alntlöán gradually became the dominant power in the alliance.

Shortly after the formation of the Tripartite Alliance, King Torton instigated sweeping reforms to the Viriducian state and religion. He ordered the burning of most of the extant religious texts, claiming that it was not wise that all the people should know the truth. Now religious knowledge would be the preserve of a caste of warrior-priests.

After Accobuviax succeeded Torton as the Alntlöán emperor, more reforms were instigated to maintain control over conquered cities. Uncooperative kings were replaced with puppet rulers loyal to the city. A new imperial tribute system established Alntlöán tribute collectors that taxed the population directly, bypassing the authority of local dynasties. Accobuviax also instituted a policy in the Vracosa lands of granting subject kings tributary holdings in lands far from their capitals. This was done to create an incentive for cooperation with the empire; if a city's king rebelled, he lost the tribute he received from foreign land. Some rebellious kings were replaced by "leiftant", or appointed regents rather than dynastic rulers.

Accobuviax issued new laws that further separated nobles from commoners and instituted the death penalty for adultery and other offenses. By royal decree, a religiously-supervised school was built in every neighborhood. Commoner neighborhoods had a school where they received basic religious instruction and military training. A second, more prestigious type of school served to teach the nobility, as well as commoners of high-standing seeking to become priests or artisans. Those seeking the latter were present for formal permission only. All crafts were controlled by local guilds, trade was conducted by the guilds in all cases as the king had declared merchants leeches on society, hindering the free exchange of goods.

Accobuviax also created a new title called "epalobrogh" that could be conferred on commoners. This title was a form of non-hereditary lesser nobility awarded for outstanding military or civil service. In some rare cases, commoners that received this title married into royal families and became kings (over several generations, of course).