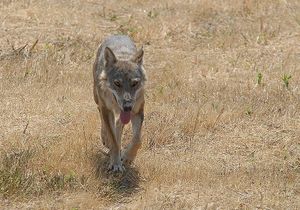 The wolf (Canis lupus luperculus), also known as the Faelish wolf, is a subspecies of the Eurasian gray wolf and is the most common in Faeland island, ranging all over the island but especially in less-populated areas. Compared to their Eurasian cousins, Faelish wolves tend to have lower hind quarters and has a gray-brown coat and a black stripe on the frontal part of the anterior legs. Compared to Eurasian wolves, Faelish wolves are slightly smaller, and have thinner skulls. In Faeland, wolves tend to form large packs like in North America, as their lives are less strongly influenced by human activities than their continental counterparts. Because of this, Faelish wolves tend to be less adaptable than Eurasian wolves in the face of human expansion, and thus are considered when planning urban growth.

In one theory, divergence of the Faelish wolf began when the island became a refugium for the species separated from Europe during the Last Glacial Maximum at about 18000 years BP. Although sometimes treated by MSW3 as analogous to the Eurasian wolf, certain scientists have called for it being classed as distinct in light of genetic differences. There is some academic backlash, however, that this new taxonomy is politically motivated.

Wolves feature prominently in Faelish mythology, and this tradition was reinforced with the arrival of the Romans in the first century of the common era. (See Vallo-Roman Culture)