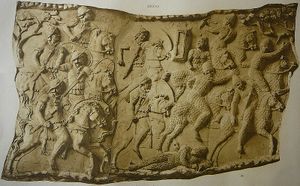 Late Roman troops forcing Alans to join the fight against the Huns.

The so-called Alan Invasion was a migration and settlement in Faeland by the Alans or Alani (occasionally termed Alauni or Halani) in the late 4th century CE. They were a group of Sarmatian tribes, nomadic pastoralists of the 1st millennium AD who spoke an Eastern Iranian language which derived from Scytho-Sarmatian and which in turn evolved into modern Ossetian (not extant on the island).

The "Alans" known to Faeland were a largely Romanized group of people from Armorica (Brittany) who migrated to Faeland under pressure from first Syagrius and then the Franks. They intermingled with the local populace in Gaul, and became ethnically of Gallo-Roman and Alan stock, but their language reflected more of the latter than the former, except notably in their personal names.

Around 370, the Alans were overwhelmed by the Huns. They were divided into several groups, some of whom fled westward. A portion of these western Alans joined the Vandals and the Suebi in their invasion of Roman Gaul. Another group of Alans, led by Goar, crossed the Rhine at the same time, but immediately joined the Romans and settled in Gaul.

In Gaul, the Alans were settled by the Roman Magister Militum Aetius in several areas, notably around Orléans and Valentia. Under Goar's successor Sangiban, the Alans of Orléans played a critical role in repelling the invasion of Attila the Hun at the Battle of Chalons. After the 5th century, however, the Alans of Gaul were subsumed in the territorial struggles between the Franks and the Visigoths, and ceased to have an independent existence. Flavius Aetius settled large numbers of Alans in and around Armorica in order to quell unrest.

Later, when Syagrius was fighting to keep the Franks at bay in his rump province of Gaul, many "Alan" horsemen from the west were sent to Faeland to settle, recruit troops, and send back supplies and horses. Ultimately, Syagrius was assassinated and the Franks assumed control of the territory the Alans had settled.

The Alans that made the crossing brought their families and settled near the coast, establishing friendly relations with the Romans in the province to the north in the early 400s CE.

As Frankish power grew, many Alan-descended people saw Faeland as an opportunity to escape Frankish service. They migrated in great numbers, and with such varied backgrounds that upon settling, most quickly absorbed the local language. 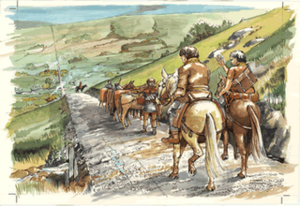 Artist's impression of Alans migrating to the interior.

Fourth and fifth-century inscriptions from the Alan settlement south of Frosino, called Serboi, mention both deaths and successful crossings from Armorica (on gravestones) as well as amicable intercourse with the native tribes. The historian Mehal Dumas identifies the Serboi settlement as the historical ancestor of the future Alan kingdom.

Some historians argue that the arrival of successive waves of "Alans" from Armorica throughout the early and mid 5th century, not necessarily political ambition, on the Faelish coast forced a portion of Alans previously living there to move west-northwest into the lands of the Aravanni beginning in the 480s, possibly merging with them against the Cessereni. There, united, they would become the precursor of the historic "High Kingdom of Faeland", known to contemporaries as the Kingdom of Aln.

It's believed that some Alans may have resettled to the north (Pentapoli), merging with Vallo-Romans and settling in the upper River Lhemine valley, specifically in Cluviæ. 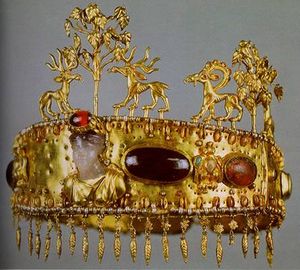 The crown of the Kingdom of Aln.

Many of the Alans eventually settled at the confluence of the Rómhhánach and Unser Rivers, where they founded the city of Aln in 523 CE. Shortly thereafter, a Kingdom of Aln (also known as the Kingdom of Faeland due to its status in the middle ages as a High Kingdom) was established. With the relative friendliness of the Latin Coast to the north, The new kingdom sought expansion into the heartland of the island, encountering the local kingdoms and battling them one by one.

By 1400, the kingdom had largely shifted its way inland, and Aln itself had become a border town. The capital long since having followed the royal court, which was now deep in the interior, at Alntlöán, and based largely in the Great Faelish Plain.

In the 4th–5th centuries the Alans were at least partially Christianized members of the Arian church. As time went by, the settlement in the east came under Vallo and native influence. It was largely left behind with the rise in importance of Aln, whose fate would eclipse its status. In turn, Serboi would become an important port and later, the site of another "invasion".

The linguistic descendants of the Alans no longer exist, although some personal and place names live on in the areas of densest settlement. Although the Alans eventually shifted southward into the Rómhhánach valley, the original heartland was along the River Raebigho westward to the River Unser. Just before the Nantes crusade, the area today called Saxony had become border country; and was controlled by eight loosely-allied cantons of Sarmatio-Faelish descent, known as the Octarchy.