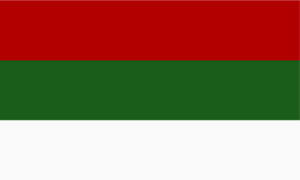 Civil flag and ensign of Fáel. 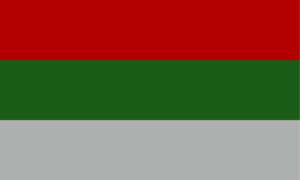 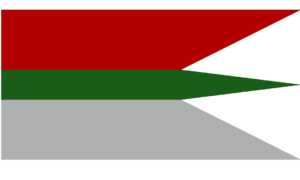 Naval ensign of Fáel (modeled after Norwegian counterpart with respect to Aröese people.)

The national Flag of Valania -sometimes referred to as the Faelish Colors- is a horizontal triband of crimson, green, and white. Introduced in 1935, it is still in use today. Since 1937, the flag has officially been the national flag of the Valanian Federate. It most strikingly resembles the flag of Bulgaria, and except for variations in color, is identical to the defunct Duchy of Anhalt. This has frequently been an issue during chronomotive expeditions to the 19th century North German Confederation. The bundesland Saxony-Anhalt, in fact, maintains in its archives a prepared legal action by its antecedent the Free State of Anhalt to sue the government of Faeland for the "illegal appropriation" of its flag. The Nazis, however, merged the state with Magdeburg. In legal terms this meant that the "Free State" had been seized in the middle of the night for "special treatment" and "shipped East".

The proportions of the flag are 2:3 (that is to say that, as flown horizontally, the flag is 50 percent wider than its height). The Faelish government has described the symbolism behind each color thus: green representing the Faelish indigenous cultures, white representing the aspiration for peace, and red representing the nations that have settled the island (red is a common color among them).

In relation to the national flag of Faeland, the Organic Law simply states in Article IXX:

"The flag of Fáel is horizontal bands of green, white, and crimson."

The horizontal fesses are bands of equal size in the colors, from bottom to top: white, green (officially "verdant green" but sometimes "Faelish green"), red (officially "scarlet"). As there are no further statutory requirements in relation to the flag, the General Government takes responsibility over matters relating to the flag. In its advisory role, it has issued guidelines to assist persons in their use of the national flag. The flag should be rectangular in shape and its width should be one and a half times its height, translating into an aspect ratio of 2:3. The three colored stripes — red, green and white — should be of equal size, and horizontally disposed. The precise colors of the flag as set by the government are:

The flag should normally be displayed on a flagstaff, with the red fess positioned at the top of the flag in relation to the flagstaff, in other words the hoist; the green fess in the center; and the white fess at the bottom, opposite the red. Provided that the correct proportions are observed, the flag may be made to any convenient size. 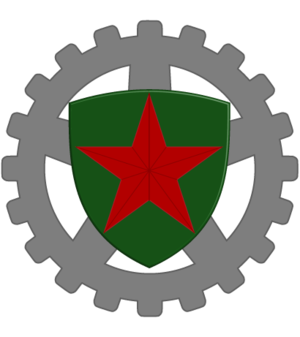 Although this flag has no historical precedent, it was adopted readily by the General Government due to its simplicity and meaning. The white is said to symbolize the neutrality of the nation, the green represents the island and its people, and the red represents the foreign cultures who have been there (namely Romans, Spanish, and British, for all of whom red is a significant color).

The green pale in the flag symbolises Faelish culture dating back to The Washing, when indigenous culture mixed with La Tène continental Celtic culture. The red, or crimson, represents the settlers over the centuries who were both European and British. It was decided to represent them in the Faelish flag in an attempt to reconcile the transplanted populations in Faeland with the Faelish independence movement, which was largely a native undertaking. The white in the center signifies a lasting peace between the various cultures and a worldwide promotion of peace by Faelish example (see Faelish Exemplarism). The flag, as a whole, is intended to symbolize the inclusion and hoped-for union of the people of different traditions, languages and cultures in the Faelish Isles, which is expressed in the Organic Law as the entitlement of every citizen of the independent Faelish confederation, regardless of ethnic origin, religion or political conviction. There are exceptions to this generalized, magnanimous theory. For instance, the inhabitants of the Aroëse Archipelago have no precedent for green or red as symbols of their culture. 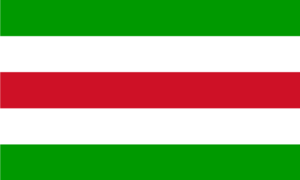 Occasionally, differing shades of the colors are seen at various functions. However the government has states that these misrepresentations should be "actively corrected", and that worn-out or faded flags should be replaced. In songs and poems, the colors are sometimes enumerated as "green, cream and scarlet" in song, using poetic license. The use of a shade of off-green or off-red is also often done intentionally by those who are not comfortable with the generally held belief that the flag fairly represents the nation. The Faelish government discourages this in an effort to foster peace and unity. Variants of different guises are utilized to include, for example, various emblems of Faeland such as the wolf, the Member States or heraldic charges. 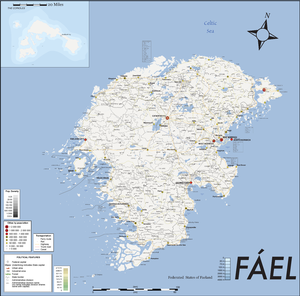 The DRA is the leading supporter of a new flag resolution.

Some states, such as the Aroës, feel the flag does not represent their people. In the case of a country like Dhíall, whose flag contains green, there is arguably representation, but it is entirely coincidental. Currently there is a competition underway to adopt a new flag. Designs are welcomed by the Directory for approval. 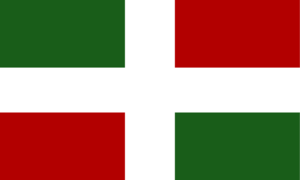 Faelish-registered vessels have flown the Faelish Ensign since September 1939, after the outbreak of World War II, when a decree was made to ensure neutral Faelish ships were not mistaken for British ships (until that time, no specific laws had been passed, and many vessels still employed the UK's Red Ensign). Some ships flying the new flag were nevertheless sunk by Germans, who did the same to newly independent Irish vessels.

When the flag was hoisted over the passenger ferries in Lito their British crews went on strike. Five days later their owners transferred the ferries to the British register and the Red Ensign was restored. The ensign's official status was formalized by the Merchant Shipping Act, 1958. Today, all Member States' vessels must fly the proper Faelish colors.

The Faelish ensign may or may not be flown by all civilian vessels, but the following must display the flag by law: 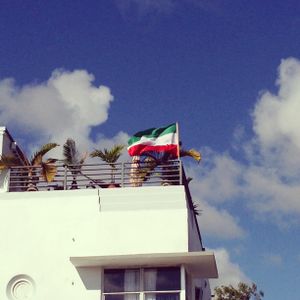 w:View>Normal/w:Vieww:Zoom0</w:Zoom>c-logoclaff:DEEP-CITY<w:TrackMoves/><w:TrackFormatting/><w:Punctuation:ingsoc-ket/<w:ValidateAgainstSchemas/nuzpk><w:SaveIf_X_Invalid>false lead>>/w:SaveIf_null_Invalid> w:IgnoreMixedContent>false</w:IgnoreMixedContent><w:AlwaysShowPlaceholderText>??p</w:AlwaysShowt&w:DoNotPromote-string/SoS>"The reason why the Faels are ungovernable is that the inhabitants have long ago learned to distrust and neutralize all written laws and to govern themselves in their own rough fashion, as if official institutions did not exist. This arrangement is highly satisfactory because it cures ills, promotes justice and not tyranny, discourages crime, and makes use of the locals best qualities. It has kept the country stagnant and decentralized in almost every way."

On ceremonial occasions when the national flag is being hoisted or lowered, or when it is passing by in a parade, all present should face it, stand to attention and salute. Persons in uniform who normally salute with the hand should give their standard uniform salute. Persons in civilian attire should salute by standing to attention. The salute to the flag when it is being borne past in a parade is rendered when the flag is six paces away and the salute is held until the flag has passed by. Where more than one national flag is carried, the salute should be given only to the leading flag. 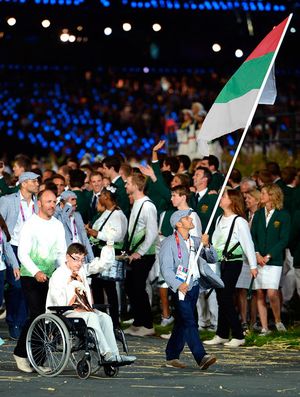 Faeland represented at the 2014 Winter Olympics.

The national flag should be displayed in the open only between sunrise and sunset, except on the occasion of public meetings, processions, or funerals, when it may be displayed for the duration of such functions. When displayed on a platform, the national flag should not be used to cover the speaker’s desk, nor should it be draped over the platform. The national flag should never be defaced by placing slogans, logos, lettering or pictures of any kind on it, for example at sporting events. The flag should not be draped on cars, trains, boats or other modes of transport; it should not be carried flat, but should always be carried aloft and free, except when used to drape a coffin; on such an occasion, the green should be at the left hand side of the deceased. The triband may be draped across the coffins of the Federal Chancellor (including former chancellors), soldiers and official personnel killed in the line of duty, and other notables accorded state funerals. Care should be taken at all times to ensure that the national flag does not touch the ground, trail in water or become entangled in trees or other obstacles.