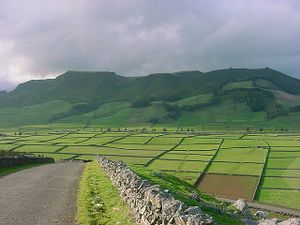 Fig. 5 The edge of the Faelish Plain, showing the steep mountains of the Almuhr surrounding cultivated land in NE Tehon.

The Great Faelish Plain, or Faelish Plain (Faelish: Xečmara; rarely: Great Çelathi Plain) is a principal geographic feature of Faeland Island. The plain is the basin of a caldera extending approximately 250 miles in a northwest-southeast direction, including three major draining rivers (the Verdan, Soacan, and the lowermost Rómhhánach); it runs from the Northwestern Rhomine Mountains to the Porromar Bay. The floodplains of the Trifluvian Basin are often considered separately since they are much lower than the plain.

The plain is the surface of the collapsed magma chamber of an ancient volcano encircled by mountains from the four o'clock position, almost unbroken all the way around to the two o'clock position. In addition to the Verdan and its affluents the contemporary surface includes the Anne's, Raebhigo and (possibly, according to definition, the Lhemine to the south and east, the Vinder, Camh, and Baeth, to the north, among the many streams that empty into the oceans besides.

Geo-political definitions of the plain depend on the defining authority. The Faelish Plain Water Board, authorized in 1969 by Law no. 183/89 to oversee "protection of lands, water rehabilitation, the use and management of hydro-resources for the rational economic and social development, and protection of related environment" within the plain, has authority in several administrative regions of central Faeland, working within the framework of the government of the Ríocht Fíl, under the supervision of the General Government's Bureau of the Environment. The law defines the plain as "the territory from which rainwater or snow and glacier melt flows on the surface, gathers in streams of water either directly or via tributaries...". The United Nations Environment Program includes the mountains as far as the sources of the tributaries of the rivers but excludes some rivers that flow in a generally different direction than the divide creates for the majority of rivers (which is to flow easterly).

Farms have a more industrial flavor in the north of the plain, where springwater is harder to acquire.

The Faelish Plain is often regarded as a syncline, or dip in the crust due to compression at the edges. Regardless of whether this concept accurately describes its geology, the plain is manifestly a sediment-filled trough, or virtual syncline. The surface terrain is therefore divided into two overall types of landform: the plain, or flat surface of the fill, and the anticline at the edges, taking the form of hilly country in which the outcrops of the original rock are visible along with alluvial fans formed from the outwash of the more severe anticlinal terrain; that is, the Rhomine Mountains and its ranges.

The plain is broadly divided into an upper, drier plateau studded with lakes, often not particularly suited for agriculture (closest to the mountains, ostensibly the hilly "Midlands"), and a lower, very fertile and well-irrigated center, known as the Lowlands. The northern areas of the Faelish Plain have local names which reflect in their meanings being only modestly suited for farming. These areas are relatively remote from easily-tapped water tables and are covered with rocky woods and drier soils. 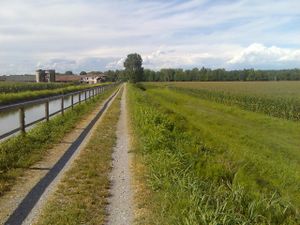 A typical farm in the southern Lowlands area.

The central plain derives from a geologic feature called the fonthing ("springing") line or zone, a band of springs before the foothills of the mountains, heaviest in the south and southeast, on the lowermost slopes of the anticline. Its width varies from a few kilometres to as much as 50 km (31 mi) wide. The fonthing line is the outcrop, or intersection, of the anticline's water table with the surface at the edge of the Lowlands where the mountains begin. The rock above the line is porous. Surface water in the intermittent streams of the mountains tends to disappear below ground only to spring out again in the fonthing zone. The spring zone is often called "the pleasant valley" (despite not technically being a valley, but sections of valley sporting higher numbers of springs).

Surface runoff water (the River Verdan and its confluents) is not of much value to the plain's population for drinking and other immediate uses, being unreliable, and often of dubious potability. The cost of purifying it for human consumption makes that process less feasible. Its main anthropic value is for hydro-electric power, irrigation and industrial transport. The fresh drinking water comes from thousands of wells concentrated especially in the southern part of the fonthing zone. The major settlements therefore are near that zone, which has become the center of urbanization in Fíl, and is now an almost continuous megalopolis lining the separating the north agricultural section from the South Face, which stretches from Lito westward.

The lowest parts of the alluvial plain were settled and farmed earliest, in Vhaetalic times, and have since been almost totally converted to settlement since the Middle Ages, when efforts from monastic orders, feudal lords and free communes effectively worked in concert to turn land farther inland over to agriculture. Older, larger cities deriving from those times are still in the Trifluvian Basin. 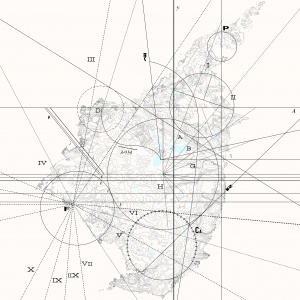 A pataphysical projection of calderas on the island.

The caldera and surrounding mountains also display evidence of a tectonic collision of an offshore land mass, Pherennis (modern Pentapolis), with the mainland, an incident within the collision of the Faelish and Eurasian plates. Pherennis was essnetially an insular caldera. Since the Messinian (7-5 mya) the system has been filling with sediment mainly from the older mountains but also from the plain itself. The shoreline of the eastern island depends on a balance between the sedimentation rate and isostatic factors. The evidence of this collision is the Fissure, which forms a neat boundary between the plain and the Aemili range to the north.

The Faelish Plain has a mild continental climate and a semi-Oceanic humid subtropical climate, depending on the part of the plain one is referring to. Winters are not long, but foggy, damp and chilly, with sudden bursts of frost from moisture sneaking in from the north; the urban heat effect has made them less foggy and cold than before, especially near the eastern coast. Snow was once commonplace, but has now decreased; prolonged winter droughts increasingly deny sufficient moisture to the soil. Spring and autumn are well marked and pleasant, while summer can be quite oppressive, hot and humid, with sudden violent hailstorms and, sometimes, what amounts to minor tornadoes. Both winter and summer are more extreme in the lower parts along the Verdan River, while the great lakes moderate the local climate to the north along the North Face. Wind is quite rare; only sudden bursts of foehn or thunderstorms manage to sweep the air clean. The almost enclosed nature of the Plain makes it prone to a high level of pollution, especially in winter when cold air clings to the soil. It is suspected that this is one of the reasons Faeland has always been ahead of the curve in attempts at curtailing smog and air pollution. 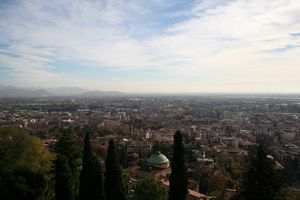 Cinnte, near the Valadurian border, looking northeast. One of the older cities of the plain.

Cities are more recent by the coast than in Central Faeland. The first known inhabitants of the thick forests and swamps in ancient times were the Vhaetalic peoples, a race of indeterminate (but likely Indo-European) stock. After the progressive immigration of peoples of Celtic stock, in the 4th century BCE the central and mountainous regions had largely been conquered and colonized by the newcomers. The Celtic domination left significant marks and introduced urbanization, but was limited in scope to oppida. As the Roman ascendancy dawned in the Gallic Plain, the Celtic peoples developed the Lowlands, and settled into petty kingdoms.

The Celtic newcomers, divided in major tribes dwelled mostly in the plains, in time absorbing the mountain populations. A warlike people, they even raided and burnt there way south as time went on, encountering fiercer and fiercer resistance from the southern, more advanced, cultures. Revenge took time, but was lasting and eclectic: Celticity, while leaving significant traces in the substratum of Faelish cultures and languages and in the ethnic composition of the "new" native Faels, was largely separated from continental Europe and replaced by Faelish language and culture. This happened very slowly over time, as Celts dotted the region with bustling colonies, and slowly traded and intermarried with the local populations when the influx from Europe dwindled (leaving outright war less sustainable). In many regards, Celtic ethnic groups conquered the island, but the ebb of new arrivals meant that the new masters of Faeland had little choice but to live in peace and co-exist with their new subjects.

During the colonial period of British rule (including the time of the British Biscayne Company and the Demesne, the plain was largely turned over to agriculture. The Company used a process called "parcelization" to create rigidly defined borders for all properties. This meant that farms rarely changed shape or size, which meant keeping track of production and quotas could be accurately measured. In time, nearly all the farmland was converted to this method, creating a dramatic affect across the country. Essentially every field was required to build a five foot palisade, cover it with earth, and then plant it, to create a natural "fence." Decades later, as the plants continued to grow, it became impossible to see from one field to another.

This traditional method has been preserved, and for the most part, Faelish farmers tend to like the privacy. Where environmentalists are concerned, however, is that in reforestation projects, the earthen barriers tend to restrict the movement of larger animals. On the other hand, frequently internal barriers can be eliminated, creating larger parcels, which can then be left to seed, growing naturally into new, protected forests.

Since these parcels have been in existence for nearly 200 years, unmolested, the records for all of them are very accurate and most require government permission to alter. They are regarded as something of a national treasure.

Sometimes referred to as the "farmland fortress", military experts have often commented upon how difficult it would be for an invading army to traverse the plain, divided as it is into so many walled fields, with line of sight limited to hundreds of yards, if not less. During the Faelish War of Independence, indeed, most fighting took place along the coasts, mountains, and in the cities. The Faelish forces needed speed to be effective and the British had no desire to bog down their war machine dismantling fields; in both cases neither party was willing to take the fight to the Lowlands. In many cases, foliage has overgrown the dividing roads and paths, restricting aerial surveillance of movements as well. One newspaperman ominously predicted that, should the war go inland, "...we will find ourselves fighting a thousand little wars."