History of the Norse in Faeland 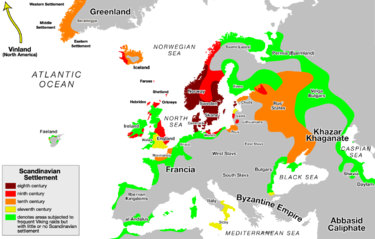 The History of the Norse in Faeland pertains to the dawning of the Viking Age. Central Faeland remained largely untouched by the invasions, and the political and cultural composition of the Latin Coast was still largely unchanged since the era of Syagrius II.

In fact, it had become such a bastion of Western learning that the Roman Catholic Church, which saw the interior of the island as seething with paganism and heresy (See: Christianity in Faeland), established a marked presence in the north. As the Bishopric of Falx began to consolidate wealth, it drew the eyes of the Norsemen. In time, the raids began and sent shock waves through Faeland.

The most unique result was the establishment of Sea Lords to counter the Viking threat.

The Pentapolis was assaulted on numerous occasions, but in large part managed to hold off its assailants through such civic alliances as the Fraternal Cities. Rebuffed, the Viking marauders often turned to the easy pickings of the Dhíall, peppered with relatively defenseless Catholic missionaries. The attacks forced many of the clerics to flee to the interior (primarily into the Kingdom of Aln, establishing a presence in the court of the Asterion Dynasty). Over time, the remaining monasteries began to militarize, coalescing into the short-lived and briefly powerful League of Tíal (whose Lord Abbot was merged with the the Sea Lordship of _____).

Painting of the landing of the Norse in the Aroës.

Viking camps were established along the the Atlantic coast and heavily in the Aroës Archipelago.