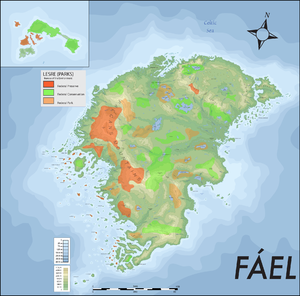 The Lesre of Faeland (lesre: (Faelish usage) "sovereign forest") are areas of relatively undeveloped and scenic landscape that are designated under the Lesre and Countryside Act 1969. Despite their similar names, "national parks" in Faeland are quite different from national parks in many other countries, which are usually owned and managed by the government as a protected community resource, and which do not usually include permanent human communities. In Faeland, designation as a park/conservation/preserve may entail substantial settlements and human land uses which are often integral parts of the landscape, and land within a national park may or may not remain largely in private ownership, although usage of the land is severely curtailed by law.

The term lesre (sing. and pl.) is an archaic Faelish word of Bergonian origin which has no precise English translation. In Faelish, it can mean home, place, country, land, locale, environ, zone, community, unit, system, and -very rarely- state.