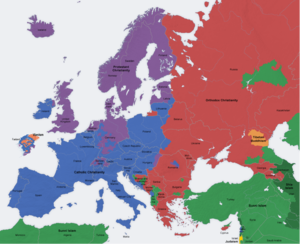 Map of the religions of Faeland.

Faeland has no nationwide state religion, although Member States may recognize official religions. In all cases, excepting Vianism, state endorsement of religion requires federal level oversight. In some cases, state endorsement is financed by official taxation of adherents. But this should be seen more as the religious institution piggybacking the collection system of the government over church-state collaboration.

Vianism is the predominant religion of Faeland (49% of total resident population). 21% of the total population are irreligious. The largest minority religion is Christianity (23%, figures as of 2007).

As of 2000, roughly half of all Faelanders professed to be Vianists; approx. 20% claimed to be Christians, and of those about 65% adhered to Vianism in conjunction with Christianity. The overwhelming majority of non-syncretic Christians are Roman Catholics, principally in The Dhiáll, Valaduria and Vila do Infante. The largest remaining Christian sects were typically Anglican (Lito) or Huguenot (Argentau) in persuasion. About 15% were irreligious or refused to answer; and Judaism was the second largest minority religion at about 4%.

The major religious confession is Vianism (79.82% of the population, including syncretists). With regard to Christians, the country is historically more Catholic than Protestant. The larger cities (Cathír na Fil, New Norwich, Georgetown et al) have become very secular (with the exception of Sânts-Nemhora). Over 20% of the population claim little or no religion.

The Organic Law consciously defines a consociational state, allowing the peaceful co-existence of all religions.

A popular vote in May 1983 on the complete separation of church and state was clearly opposed to such a change, with only 31% voting in support, to the effect that the retention of the "federal divorce, local option," system remained in place.

In October of 2006, a 53% turnout of voters narrowly approved (50.3%) a highly controversial initiative to ban the cooperation between any level of government in Faeland and Judaism, Christianity, or Islam. The referendum was put forward by the Csanimhic Union and the Association of Faelish Temples, on the basis that native religions have a duty to protect themselves from foreign proselytization.

At the time, no administrative divisions of any kind categorically endorsed any Abrahamic religion. To this day the rhetorical battle still rages and, as of yet, the plebiscite has not been converted into legislation. Proponents' arguments range from the aesthetic to the xenophobic, and objectors fear the spread of nationalism or worse.

The basic right protected by the constitution is that of public confession of adherence to a religious community and the performance of religious cult activities. Article __ of the constitution introduces a limitation of these rights if they conflict with public interest or if they encroach upon the basic rights of others, including animals. Thus, ritual slaughter is prohibited as conflicting with Faelish animal laws. Performance of cult or missionary activities or religious processions on public ground may be limited. On the other hand, the use of specialized taxes to support regional temples and churches has been ruled legal.

Traces of the pre-Christian religions of the island abound south of the Latin Coast. In the Latin Coast itself, tribes that became part of Vallo-Roman culture under the Roman Empire left only scant traces of their religion, having been syncretized after Roman occupation.

Vianism spread to the interior during the middle ages, when the kings of Aln adopted the faith.

During the massive civil war of the early-mid 20th century, sectarian violence boiled over, largely due to political rhetoric, into religious conflicts. With peace came the formation of the modern federated state in 1955, which recognizes limited state-level integration of church and state.