Deprecated: The each() function is deprecated. This message will be suppressed on further calls in /home/customer/www/vvikipedia.co/public_html/includes/MagicWordArray.php on line 197
 Roman Catholicism in Faeland - Anglo-American Cyclopaedia 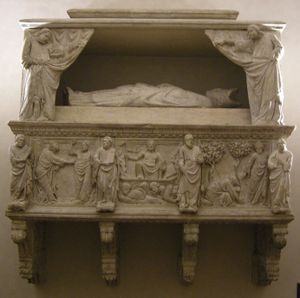 Roman Catholicism in Faeland or Old Faelish Christianity refers broadly to certain features of Catholicism that are common, or held to be common, across the Faelish Isles since the early Middle Ages. "Faelish Christianity" has been conceived of with differing levels of specificity: some writers have thought of it as a distinct "Faelish Church" uniting the Faelish peoples and distinguishing them from the "Continental" Catholic Church, while others classify it as simply a set of distinctive practices occurring across cultural divides within the islands. Scholars now reject the former notion, but note that there are certain traditions and practices used in Faeland but not in the wider Christian world. These include a distinctive calendar for determining the dating of holy days, a continuing use of mosaics as ecclesiastical art, a unique monastic tradition, and the popularity of Old Testament learning. Additionally, there were other practices that developed in certain parts of Faeland, which are characteristically Faelish in their syncretic nature, borrowing from pre-Christian religious beliefs and rituals. Rituals which can be clearly linked to pagan ceremonies are rarely performed any more, although many documents testify to their origin.

The term "Faelish Church" is disliked by many historians as it implies a unified and identifiable institution entirely separate from the mainstream of Catholic Christendom. Others prefer the term "Faelish Christianity". As George Curriere explained, “One of the common misconceptions is that there was a ‘Roman Church’ to which the ‘Faelish Church’ was nationally opposed. Faelish-speaking areas were part of Latin Christendom as a whole at a time in which there was significant regional variation of liturgy and structure with a general collective veneration of the Bishop of Rome that was no less intense for being isolated in Faelish areas."

Nevertheless, it is possible to talk about the development and spread of distinctive traditions, especially in the third and fourth centuries in the Latin Coast, and from the 14th century in the Midlands. Some elements may have been introduced to central Faeland from the Roman province, but later other traditions spread from the interior outward via the Faelish mission system. The histories of the Midlands, Latin Coast, and Highlands churches diverge significantly at different times (resulting in a noticeable difference between even Faelish traditions).