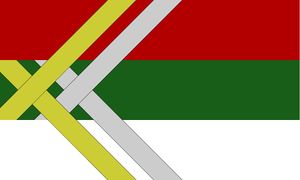 Flag of the Siawnsri Islands 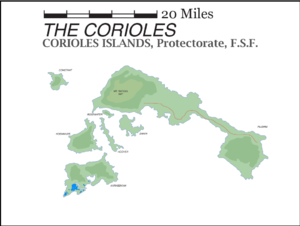 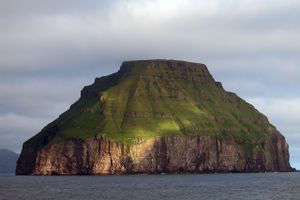 Because these once uninhabited, remote islands were settled sporadically over a span of three centuries, their culture, dialect, cuisine and traditions vary considerably from island to island. Farming and fishing are key industries that support the Siawnsrian economy. Approximately 20,000 Siawnsrian live within the archipelago’s XX square miles.

The islands have been identified as an "Important Bird Area" by BirdLife International because of its significance as a breeding site for seabirds, especially European Storm Petrels (5000 pairs) and Atlantic Puffins (10,000 pairs).

The islands were never inhabited by humans, but Norse and Icelandic sheep were kept there from ancient times, being mentioned in the 11th century work Fæleyinga Saga ("Saga of the Faelands"). The saga also features the islands as the site of a mythological battle between Frostir, father of Sacmun∂ur, and Cøtusjegjar. The battle resulted in the death of Sacmun∂ur's father and his men and the deportation of Cøtusjegjar back to Norway, whereupon Sacmun∂ur continued on to the Aroës Archipelago.

In 1912 a Canadian schooner, the Gaston, carrying a cargo of coal, was driven onto Pilgrim Island by a gale. The crew of seven were able to beach their ship, but lost their stores, and the captain was severely injured. Eventually they managed to find a cabin on the island which had matches, fuel and a lamp. They caught two sheep and were able to survive for 3 weeks before being discovered and rescued by a fishing boat. One of the shipwrecked sailors settled and his descendants still live in the Siawnsri. 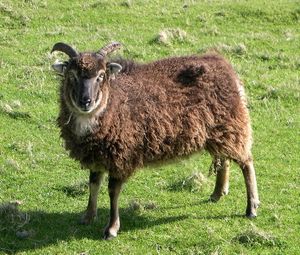 The sheep now living on the island are Scandinavian sheep, but there are feral sheep, probably derived from the earliest sheep brought to Northern Europe in the Neolithic Period. The last of these very small, black, short-wooled sheep live on Wait and Rosewater islands. They are similar in appearance and origin to the surviving Soay sheep, from the island of Soay in the St. Kilda archipelago off the west coast of Scotland.

The modern sheep of the island are gathered each autumn. People sail to the islands in fishing boats, towing several rowing skiffs. The shepherds then form a chain across the individual islands, driving the sheep into pens at the ends of the islands. The sheep are then caught, restrained by tying their feet together, and placed on boats for Pilgrim island.